UAV Training Australia has been operating for more than 10 years.

We deliver a range of RPAS training courses to individuals, businesses, industry groups and schools. We are an approved Civil Aviation Safety Authority (CASA) Training Organisation as well as a preferred provider to nationally recognised training providers under the Australia Qualifications Framework.

The UAV Training Australia team are highly qualified and dedicated towards ensuring that each and every one of our candidates reaches their full potential and goals. 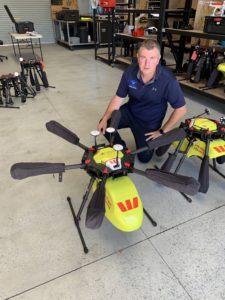 UAV Training Australia is led by our CEO and Chief Pilot Wayne Condon. A professional educator, Wayne holds, among other qualifications, a Masters in Learning Management from Central Queensland University. He has an extensive aviation industry background of 30 years of education and training experience in both the military and civil sectors. Wayne has worked tirelessly to build one of the most respected and trusted UAV training schools in Australia.

With a diverse experience in Aerodrome operations and holding a Commissioned Officers position with the Australian Defence Force, he regularly works with both military and civilian airport authorities, aircrew, ground handlers and security forces to ensure compliance in their training programs and operational running of the airport.

When he’s not obsessing over the latest UAV’s, aviation gadgets or flying the organisations twin engine aircraft, he enjoys spending time with his wife and two beagles.